One of the main issues with using a bedroom as a laboratory is that storage space tends to become slim right from the get-go. In order to fight back against encroaching components, tools and clothes, I set out today with the idea of pimping out my room with some new shelves.

I live in an attic room which is shaped like a tent, thus vertical wall space for conventional shelves is just not there. On one side of the room however, I have an archway which is about 4 ft. high. It’s an awkward shape to utilize well so I thought I should build some shelves into it. The design I went with was to have two parallel slats of wood (6″ x 1″) in each shelf, supported by bricks. The nice thing about this solution is that A, I like the look of it and B, it’s non-intrusive. I can take it down whenever I end up moving out.

So off I went today to the nearest building suppliers, via public transport, armed with a backpack and a trolley that I use for carting amps around. I was full of the joys of life! Buying the timber and bricks passed without incident but when I went around to the stock yard to collect my new purchases, I realized I was out of my depth. 28 bricks weigh approx. 14 stone. 1 Martin weighs approx. 10 stone. Uh oh!

In the nicest turn of events though, while i was lumbering (pun time!) back towards the tram stop, a lovely man stopped in his car asking if I was OK. He had been getting building supplies too and saw me struggling with my lot. Long story short, he dropped me right back to the door of my apartment. A true gent! And that was not my last encounter with people going out of their way to help during this project. Later in the day a builder who was working in another house on my street gave me a lend of a hammer and chisel for splitting bricks, when mine proved insufficient for the task.

Anyway, here are some photos of the installation at various stages. Before you judge, I am not a carpenter. I know these could be mitered into the space and tidied up far nicer than they are. The shelves do open up a good bit of space in the room though, so I’m calling this project a success! 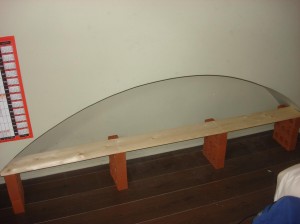 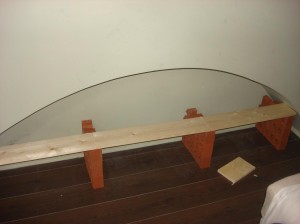 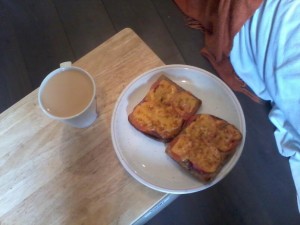